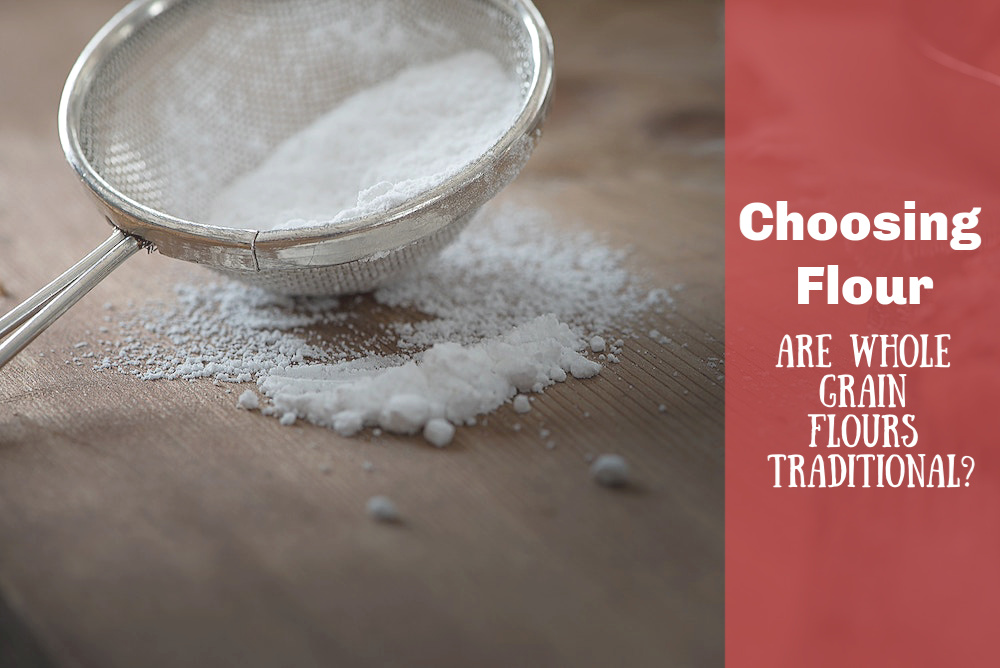 When we think of Grandma in the kitchen cookin’ up something good, that something good probably involves flour. Yet, people know very little about flour. How it’s made, how long it keeps or how to care for it. There are many shades of difference for the sake of flavor or cooking characteristics but for today’s post we’ll stick with learning more about the differences that affect health. The common understanding about health and flour goes something like this: whole grain is good, white flour is bad. This is overly simplistic. I thought a post going over the finer details would be helpful 🙂 . I’m certainly no expert, though over the years I’ve learned a little to help make my use of flours more healthful and tasty!

In short, the eating of grain and flour is traditional though I’m not sure that whole grain products available today are like flours eaten prior to the industrial era. Bread and the flour it’s created from are mentioned in writings from antiquity. The sifting (boulting) of flours to remove bran is also noted in writings as far back as the Romans. This sifting was common throughout the North America and Europe. In some places a separate building (a boulting mill) was used and a different person did the boulting. Boulting was a specialized trade … that’s where the surnames Boulter and Boulton come from. But what did primitive cultures do? The healthy primitive cultures Dr. Price studied? Weston Price simply states they ate whole grains that were soaked or fermented. Is it possible that their whole grain flour was sifted to remove bran? Rami Nigel studied primitive cultures for evidence of how they handled whole grain flours.He found that many primitive cultures also sifted out bran and recommends that we do the same.

This sifted flour would be a far cry from modern white flour. It wasn’t really possibly to create a light white flour until the industrial age when roller milling was introduced. This happened around 1870. But still prior to that mills did sift flour and charged customers according to the grade of flour received, with lighter flours being more expensive … They were regarded as a status symbol, with coarser flours reserved for poorer folk. The resulting flour would have had much of the bran removed with most of the germ remaining. The proportions would vary according to grade.

The idea of whole grain flours with the bran being healthful and desirable was introduced by the Reverend Sylvester Graham as part of a regimen designed to curb alcoholism and “lust”. He promoted a vegetarian diet and was the man who created the “Graham Cracker”. He inspired Dr. John Harvey Kellogg and his brother Will Keith Kellogg in their invention of corn flakes one of the first modern processed foods. So whole grain flours with the bran included came into awareness through the first health food movement beginning in the 1820’s. They are not traditional, really. But neither is modern white, bleached, enriched flour. So what kind of flour is traditional? What were traditional flours like?

Prior to the modern era most American towns and European villages had a gristmill. This mill was the source of flour for the village. Farmers brought in their grains and the flour was sold back in differing grades according to the grain type and coarseness. This flour was sifted (boulted) to the degree it could be with a simple sifter or cloth. This process would remove much of the bran. The flour was made on demand, not stored for long periods of time. It still contained much of the germ and would go rancid fairly quickly. The modern flour most similar to this is whole grain pastry flour ground at home. This is what I use for most things in my kitchen at this point.

It wasn’t always this way though. I started out baking with store bought bulk whole grain flour, then much later moved to grinding my own. Finding wholesome whole grain flour is a bit of a chore and I found it easier to make at home. Why so difficult? White flour became wide spread due to it’s long shelf life. The converse of this is that whole grain flour isn’t shelf stable and doesn’t have a long life. But many distributors seem to treat it as if no special handling is required and many times I’d find that the flour I just bought was already rancid.

In buying whole grain flours it’s important to consider how they’ve been handled. Whole grain flours include germ which is the part of the grain containing oil. Before it’s ground mother nature has it’s own packaging to keep the germ fresh. Grinding into flour crushes this natural packaging releasing the oil. This nutritious germ oil in the flour goes rancid easily. To prevent this whole grain flours need to be refrigerated, frozen, or gas flushed and vacuum packed. This makes finding a whole grain flour that is fresh somewhat difficult.

Years ago, back when I made bread very regularly I generally bought whole grain flour from the bulk bins at Whole Foods. I wondered why some batches seems sweet and others kinda bitter. I mentioned this to the owner of a health food store in Houston, and he told me how he kept all his flours and nuts in refrigerator to prevent rancidity. He also went the extra mile to ensure they were refrigerated on the way. Well, after that I bought my flour from him  and my loaves were uniformly sweet.

Now I had become aware of what that rancidity tasted like. I found it in a number of whole grain products. I had learned that that flavor was not “just how whole grains taste” but was in fact rancidity. After moving from Houston I found it hard to locate any flours that seemed fresh to my palate.

How I Make Flour

So, in the pursuit of freshness, I bought a grain mill of my own 🙂 . At first, it was just a simple cheap hand mill which just didn’t make flour fast enough for me and was tiring to use. Then, I lucked upon a Diamant Grain Mill on ebay at a fraction of it’s cost new. I love the old fashioned look of this thing … it still makes me smile everyday :-). We used it for several years, though it is still tiring to use you can produce much more flour with it than my old mill. Production of flour though was still lower than I liked though.

After many years of use I retired the Diamant, made it into a conversation piece and bought a Nutrimill which I’ve been thrilled with. It grinds many cups of flour very quickly. From this I get a fresh ground flour complete with bran. This is what I used for most purposes up till last year when I learned a little more about the history of flours and bran from reading a couple of books namely Cereal Killer and Fiber Menace. Now I go one extra step. I bought the new sifter attachment for my Bosch Universal Kitchen Machine and use it to sift this flour into a healthy, freshly ground whole grain pastry flour with much of the bran removed. It has a 16-opening per inch mesh filter which only removes the bran. I do this in batches and either freeze or refrigerate the resulting flour. Adding this extra step removes much of the phytic acid present in the flour even prior to soaking or fermenting. The greatest concentration of phytic acid in grains is in the bran. Reducing phytic acid is the main reason for the soaking and fermenting of grains.

How to Choose the Best Flour

Does the Specific Grain Matter?

Wheat, corn, spelt, rye, amaranth, buckwheat, Kamut, barley, oats, etc … Does it matter which one you pick as far as nutrition goes? Well, yes and no :-). Each one of these grains has it’s own intricacies of flavor and nutrition. Some like corn need to be soaked differently and so will make a difference in your kitchen routines. There is also some controversy over hybrid strains of wheat with some arguing that we need to buy heirloom varieties or avoid wheat altogether. The jury is still out on this. Personally, I don’t have a strong opinion about it and I buy bulk organic wheat for the most part. I’m still mulling it over and so far I haven’t seen strong enough evidence to justify the difference in price.

Since man does not live by bread alone …