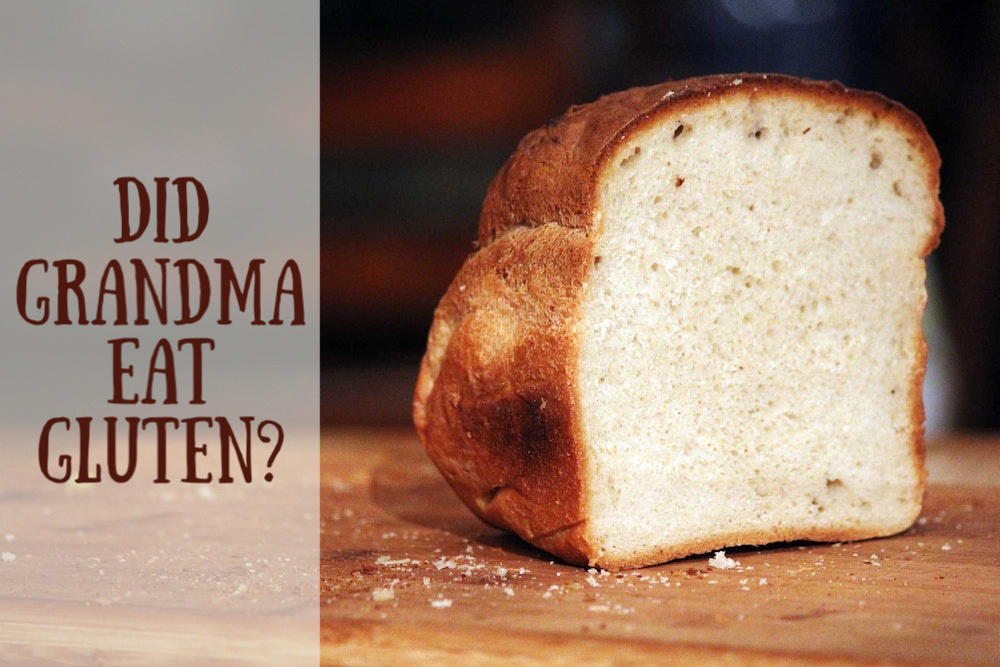 Take a trip thru the grocery store and you’ll find gluten-free labels everywhere! It seems gluten-free eating has arrived and everyone is doing it. The guy in the cubicle next to you, his wife cured her allergies by going gluten-free. Your doctor suggested that you might consider it for weight loss. Your friend wants to go gluten-free but says they have an unreasoning addiction to bread that drives them eat entire loaves in the middle of the night 😉 .

Well, call me a skeptic but I remember when the idea of eliminating wheat was deemed a bit fringe. After all wheat has been a staple of the human diet for millennia. I use traditional diets as my yardstick for determining what my diet should look like. After all, it’s gotten the human race this far hasn’t it? Our ancestors survived and thrived on a traditional diet long enough to produce us!

I receive questions about gluten and breads very often and frankly I’m concerned about all those who are new to the world of real food being confused by the avalanche of negative press gluten containing products and starches in general are receiving. So let me just state as clearly as I can that restrictive diets like the gluten-free diet are not traditional! Now, I understand that there are many with genuine medical issues surrounding gluten. This post doesn’t address their situation at all. Instead I’m talking about a very modern tendency to restrict entire food groups for a lifetime based on very flimsy evidence or even worse fashion. I view this as a dangerous practice and what’s more, your Grandma would have too.

Grandma Ate Gluten and Plenty of It!

Yes, she did eat gluten. Your great grandma most likely even made her own bread every week developing the gluten with her own two hands, forming the dough into loaves and baking them in a wood fired oven. These loaves were made with a sourdough starter that she maintained and shared amongst friends. By the time the loaves went into the oven they were well fermented to get a good rise and flavor and to reduce the anti-nutrients present in the grains. This whole process was sacrosanct in Granny’s world. The dictionary defines sacrosanct as “Regarded as too important or valuable to be interfered with.” Bread making was serious business! If you could be transported back in time to Granny’s kitchen she’d offer you bread and would be pretty horrified if you refused it. She would have seen it as high foolishness on your part.

The Hype Implies that Gluten is an Unnatural Additive

Gluten is entirely natural to grains with bread grains having the highest percentages. The rise and texture of dough is greatly affected by gluten content so some commercial bakeries do indeed add even more gluten to their breads than would naturally be present. This practice requires the ability to separate gluten and is therefore modern. The presence of gluten in grain-based foods though is totally traditional.

The Hype Implies that High-Gluten Hybridized Wheat is Basically GMO

Modern wheat is hybridized wheat. Virtually all of the food supply is grown from hybrid seeds. Peppers, carrots, lettuce, beans and of course wheat found in the supermarket or farmers market are nearly 100% hybrid varieties of plants. While there may be advantages in flavor and just sheer variety in the pre-hybridized heirloom seeds no one is eating these plants in large quantities. We are all eating hybrids every day.

Man has been influencing the breeding of plants for centuries. Hybrids have been around for at least a couple hundred years and represent a more sophisticated kind of tinkering than what was done before. Hybrids became popular with farmers about 100 years ago during Granny’s time. They are produced by cross-pollinating varieties to produce a new variety with desired characteristics. It does NOT involve splicing of genes across species or any of the other Dr. Frankenstein horror show science genetically modified foods are subject to. Barring possible contamination from Monsanto’s GMO wheat experiments nowhere in the world is the wheat supply grown from GMO seeds.

You might have read the argument that since modern hybridized wheat contains considerably more gluten than ancient varieties that we modern folk should avoid it like the plague. Modern wheat does contain more gluten than old varieties, that isn’t in dispute. But does it follow that we should completely cut out this staple of traditional diets completely as a result? I don’t think so. If you feel it’s a priority in your budget to ensure your grains are as old school as possible you could consider spelt or einkorn wheat instead of the more modern hybrids. There are options other than elimination.

Many of the arguments against modern wheat go on at length about modern baking methods, quick rise yeasts and dough conditioners for example. These are really not arguments against wheat or gluten but are instead arguments against eating processed foods. We all know that commercial bakeries use such things and more, like preservatives to keep the bread fresher longer, dyes and even artificial flavorings. If you want to eat breads make them at home using traditional methods or find yourself a good local bakery. Baking bread is one of those scary to do household tasks that once you try it you wonder why it was so intimidating! If you’re following The Granny Plan you could make it a kitchen project to work on over a bit of time.

What If You Are Having Trouble Digesting Grains?

Many people find that proper preparation of gluten containing flours makes them completely digestible. Really, rarely does anyone in our culture have a chance to eat properly prepared grains. It’s worth a trial run if you’re experiencing trouble. If that doesn’t help addressing problems with bad gut flora helps many to eat gluten containing foods without issues. Some of the protocols for addressing gut dysbiosis involve eliminating grains for a predetermined time while rebuilding the gut. Also worth a trial. I’d encourage everyone to give it much serious consideration before deciding to cut gluten long-term though. Like Granny it pains me to see people cut this major traditional staple out of their diet forever.