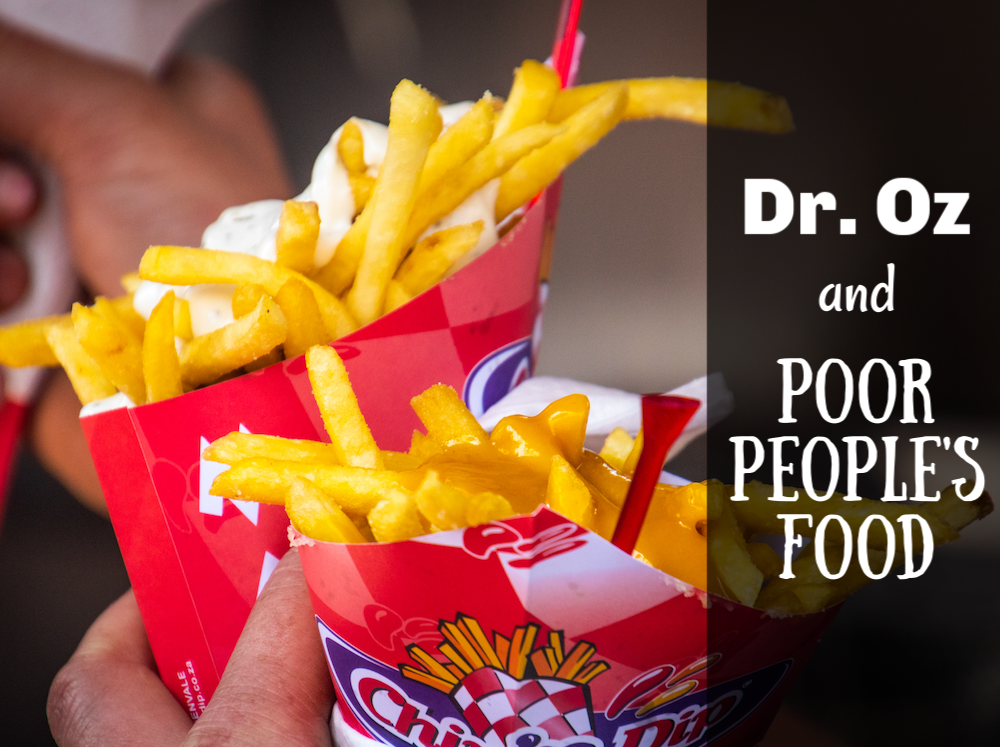 Poor peoples food. Just the phrase has a grating feel to it, doesn’t it? Just like a sneer.

This week Dr Oz wrote an article for Time that implied that those who actively question the quality of supermarket food are simply food snobs who are seeking an elevated status based on the purity and sophistication of their food choices. This article contained a sneer, but this one was for people working hard to get better food for their families and not for poor folks. The article implied that the only reason anyone would buy clean, real, organic food is so they can be seen to be the kind of people who can afford to completely avoid supermarket food.  Everyone, and I do mean everyone, is waking up to the fact that ordinary, processed supermarket food is not wholesome or good. And increasingly it is being seen as poor people’s food. And people are getting mad. The issue is that not everyone can eat as much clean wholesome food as some are able to do. This is an issue of economics and ultimately has little to do with snobbery … that’s just a red herring.

But I think we should talk about that red herring. This article is not the first place I’ve seen this kind of argument in the media. There have been many articles with basically the same stuff but from less well-known authors. It’s important to talk about because it is really distracting. Everyone has strong feelings about this it seems. Nobody wants to be looked down on, or become the the kind of person who looks down on others. This is exactly the kind of thing that makes people really upset!  Spinning the argument this way gets people off the topic of the availability and affordability of wholesome food which are the real issues here. So let’s see if we can put it to bed and get back to the work of finding ways to make real food more affordable so we can all have more of it in our lives.

A Kernel of Truth

Like most arguments, this one contains a small kernel of truth. Have you ever felt that people look down on you for your food? Felt that you were looked on as lower class because of your choices? I know I have. The bag boy who asked with a smirk if I made Hamburger Helper with all the ground beef I bought. The cashier who seemed to pity me for my cart with dried beans, rice and unbleached white flour. The coworker who implied I was xenophobic and narrow-minded for my dislike of sushi to name a few instances. I think we all have experiences like this from time to time.  And the truth is there are snobs out there who do in fact pride themselves on their high-class food. They enjoy these little moments where they can boost their ego just a bit at the expense of someone else.

And then there are little food snobberies brought on by advertising. What, you don’t buy brand name beans? Instead you buy the store brand. Or you never buy processed foods. Believe it or not when I was a child this was a mark of poverty! Middle-class families bought processed store brand foods. People thought you were poor if you had to pinch pennies like that. No one would buy from scratch ingredients with the work it entails unless their budget forced them to. While this attitude has completely flipped now, I still see some remnants of it here in Texas. Like the cashier I mentioned above.

I live in an area where you can find people who will skip meals to afford to eat at a hot local restaurant. Where some folks are embarrassed for people to know what the actually normally eat when no one is looking. They don’t have a lot of money to eat this expensively all the time but they’d like for people to think they do. This to me is the real snobbery, using food as a status symbol and an identity at the expense of health. I doubt this is all that common though really. For whatever reason we do see some of it here.  And this kind of snobbery is relatively common in the media. This is the snobbery to which Dr. Oz refers.

Behaving this way isn’t healthy so health is clearly not the top concern. They are missing meals or eating ramen and mac-n-cheese when alone, so they can eat expensively when someone is looking. While they give lip service to healthy eating it just isn’t the main worry, or they would balance out their food budget more.  This lip service to health makes it easy for the doctors of spin to mix these folks up with those who just want healthy food for their families.

The Doctors of Spin

Dr. Oz implies in this article that average people will happily accept the compromised food found in the average grocery store. That only the 1% eat well, and the remaining 99% of us can be satisfied with supermarket fare. This is stated as an irrefutable, unchangeable fact. So we the 99% should just accept it. He thinks that the 99% will just ignore or not understand the firehose of negative information coming out about GMO’s, pesticides, herbicides, trans-fats, hydrogenated oils, artificial sweeteners, excitotoxins and other food additives. That we don’t need to concern ourselves with way the animals we eat are raised. That we won’t realize that the poor are dying younger than the well-off, a statistic that is getting worse now for the least educated of the 99%. He implies that to do otherwise is to become a wanna-be snob. In contradiction of the facts he asserts that “the American food supply is abundant, nutritionally sound, affordable and, with a few simple considerations, comparable to the most elite organic diets”. I don’t know about you but I don’t find the “considerations” needed to avoid toxic foods all that simple. I suspect Dr. Oz doesn’t either.

Make no mistake the PR firms working for the the food industry are well aware of the awakening to the state of our food supply. They are seeking to spin this situation to their advantage thru a kind of divide and conquer.  But we are smarter than that :-).

All of Us Want Clean Wholesome Food

And I mean everybody! That includes the people who boldly say they don’t care while pounding down cheetos and coke. The difference between those who eat pretty well and those who eat really badly isn’t really about caring. It’s about believing you can make changes that will make a difference. Those who say they don’t care have lost hope of meaningful change. They feel 100% good food is unaffordable so why bother at all. The people who want to be seen buying expensive food also want clean wholesome food all the time. They just aren’t willing to give up higher status to improve their overall diet.

I think part of the reason why people become discouraged in their efforts to eat better is anxiety about being on the outs with everyone! Their friends and family who don’t know a lot about eating better might think that they’ve become food snobs who feel they are superior in some way. And those real food people who do everything so perfectly may look down on me for the compromises I have to make to fit the budget, to keep peace in the family or just to satisfy a little whim here and there.

Nothing could be further from the truth! Come on in the water is warm and inviting. We all make our compromises and we’re all just trying to keep abreast of the food news and keep our families as well fed as we can. And as for your friends and family, they do truly want what is best for you. And who knows, maybe the changes you make will inspire them to make changes of their own. Making those changes didn’t make me a food snob and it won’t make you one either 🙂 .