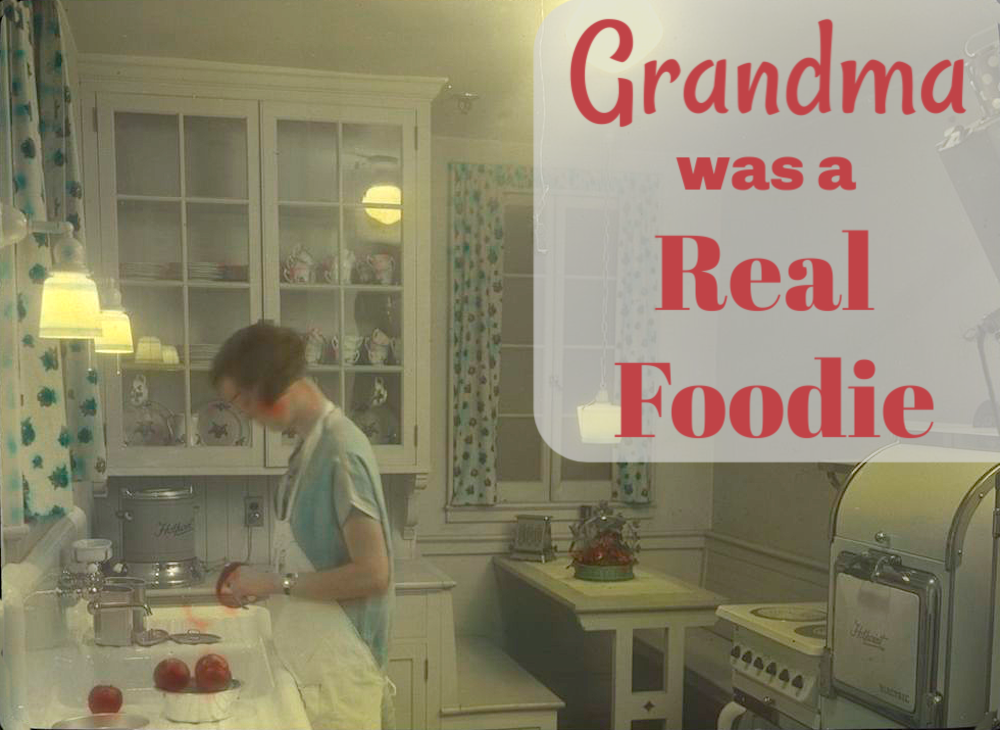 So, maybe she didn’t know it, but she was. Was Grandma well off? Well, no, no more well off than most. And in many cases she was poorer than most, especially as she got older. Still she kept on making home cooked meals with the freshest meat and produce she could lay her hands on. And she did it frugally even if she wasn’t on a tight budget, just as a matter of principle. Yet our culture tends to think of foodies as an elite group of people with the time and money to dedicate to culinary extravagance. Does this sound like Grandma? If your Grandma was anything like mine she would be shocked at the suggestion! Then she would laugh until she cried at the mere thought :-).

Let’s take a look together at what her diet looked like, from a modern perspective considering all the things that Grandma could take for granted that we no longer can.

What was right about Grandma’s diet?

The freshest meat and produce Grandma could get was pretty darn fresh and pretty darn clean. Prior to World War II the food supply was free of GMO’s,pesticides, hormones and antibiotics. There was indeed processed food but it had yet to totally saturate the market, so little or no artificial additives, preservatives, flavors and coloring. Many people had large gardens and if they didn’t much of the produce available to buy was grown only a short distance from home. Butcher’s were generally local business’s. All beef was grassfed as feedlots weren’t used. Fresh raw milk was delivered twice a week to her home along with fresh butter, eggs and cheese. Or maybe she had a cow, like my Mother Warren did and made these things herself. Many families still kept yard hens even in the city. She could readily obtain lard and beef tallow from the butcher shop. So Grandma had grassfed beef, pastured poultry, healthy fats, fresh local produce, raw milk and cheeses None of this required special effort or education, she could simply buy what everyone bought.

What was wrong with Grandma’s diet?

Mostly we as a culture seem to remember what was wrong about Grandma’s diet. Were there problems? You bet! This is what Dr. Price talked about in his writings. During the same period of time Grandma was a young woman with a young family he traveled the world seeking populations of people unaffected by modern foods. So yes, Grandma’s generation was definitely affected by the introduction of non-traditional foods and preparation.

What were some of the foods introduced? Well, sugar had been around for awhile, though it was being bought by more people as the price fell around 1900 making it more affordable. White flour started in the late 19th century and by this point was used by all. And Crisco was enjoying considerable sales. Factory canned food is another. Karo (corn) syrup was yet another as a cheap replacement for sugar. This era was the turning point away from wholesome food and toward the processed food we have now.

Why focus on Grandma’s era?

In light of these problems a reader was wondering why the focus on this time period? Why not go even further back to a very clean, traditional diet? A very good question, I think, and I’m glad to have an opportunity to answer it.

I’ve chosen to focus on Grandma’s time because it is easy for most people to imagine changing their diets to be more like their grandparents. We can viscerally imagine that diet. Smell and taste it in our imagination. It is home to us … we know deep in the bones what this diet is. And by modern standards it is a HUGE improvement! Yes, by going back 400 years we find a nutritious supportive diet. But none of us has any real experience with this diet. It remains kinda hypothetical what this might be in reality. Grandma’s diet in contrast is pretty real.

And it’s not like we’re stuck with her generations mistakes either. Starting from the solid foundation of wholesome food mentioned in the section on “What was right about Grandma’s diet” we can then modify and remove the bad elements taking Grandma’s diet back a generation or two from her. That’s why I modify the recipe’s in Mrs Dull’s “Southern Cooking” to make them more wholesome and nutritious.

Think back to the people you knew as a kid. The old folks, the middle-aged, the young adults, teenagers and kids. Didn’t each generation seem much healthier overall than people do now? The old folks worked in large gardens. My own Grandmother and Great-Grandmother lived together in Phoenix and maintained a very large garden in the midst of the desert at ages 70 and 90! Middle aged people seemed full of energy and power. Young adults seemed more energetic than teenagers do now. Teenagers were overflowing with vitality and kids, well in general were very healthy. Most of kids I remember got sick annually at most :-). I remember many many kids who hadn’t missed a day of school for years. And this was the 70’s. Statistics bear out that peoples health had already taken a dive, so just think how much more true is was in the 30’s, 40’s and 50’s. Robert Bernardini in his book “The Truth About Children’s Health” asks us over 40 to remember:

I’d like you to think back to your childhood. How many kids did you know who had leukemia, asthma, diabetes, attention deficit/hyperactivity disorder (ADHD), arthritis, multiple sclerosis, cancer, autism or were obese? Chances are, you may have known a few. Perhaps the kid down the street had asthma. Maybe there was a distant relative who had juvenile diabetes. Or you heard on the news about some rare child with leukemia. Now? It seems like everywhere you turn, you read or hear about a child with a serious health problem. How many kids do you know of who are on Ritalin or were diagnosed with a learning disability? There are whole hospitals devoted to children’s cancer. Asthma and diabetes are now considered epidemics.

I was one of those kids with allergies and asthma. It was so uncommon that many if not most adults seemed to think it was some exotic form of malingering and not an actual ailment ;-).

So, yes I think taking our diets back a couple of generations is of great benefit. And it’s relatively easy to imagine and then to do. And I think it meets with the least amount of resistance from family members. You are simply creating meals like their Grandma did. And who could object to that :-)?