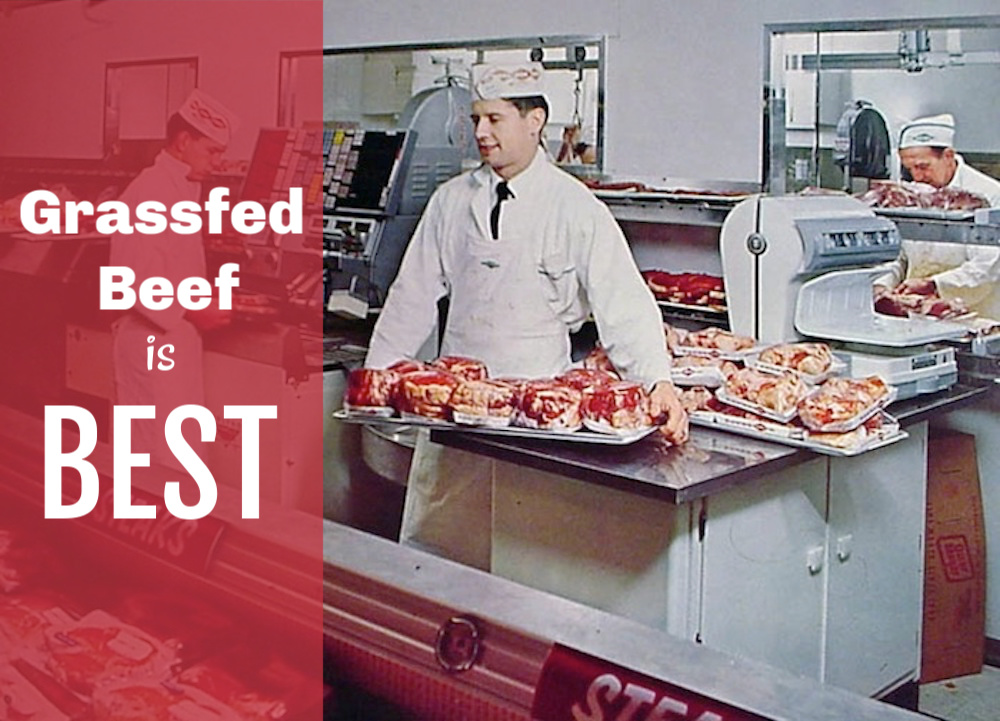 Practically everyone eats beef, except vegetarians :-). Most of us have very little idea of how that beef was raised. What I’ve found researching this post is that there is even more confusion than I expected. Keep clearly in mind though that cows are fed and brought to slaughter very differently now than they were in Grandma’s day. Since World War II cattle are generally grain finished, a very unhealthy diet for the cow. And that’s only part of the story.

Most people have the idea that cows live in a pasture for their entire life till they are taken for slaughter. Nope! Some think they are all raised in factory food environments never seeing a blade of grass. Also, no. The truth is a little more complex.

Born on Pasture then Taken to Hell

The life of most cows begins very ideally really. Most are born in the field, stay with their mom drinking her milk, eating grass and living the good cow life. There they stay till they are of a weight to be sold which generally takes around 6 to 12 months.

This is were things take a nasty turn though. From here they are sold at auction and then taken to a feedlot. If you’re imagining some nice fenced small pasture lined with troughs well, think again. Instead imagine miles and miles of cattle packed like sardines. Imagine too the worst stink you can possibly think of. Then multiply by 100 and you’ve got the smell down. If you’ve driven through the west side of El Paso on I-10 you know exactly what I’m talking about. Here our nice healthy grassfed cow is fed tons of genetically modified grains like corn and soy. Packed into this environment our cow gets sick, so the grain is laced with medication to help keep him just well enough for slaughter. He is also also fed hormones to encourage weight gain. Imagine the effect this might have on your waistline! Here he will stay a few months till he is deemed heavy enough for processing.

Cows are not Made to Eat Grains

There are numerous problems with this scenario but to my mind the most important problem is that cows are not made to eat grains. They are ruminants designed to eat grasses and roughage. In nature they incidentally eat grains and seeds on the grasses they chew on all day. In a modern feedlot that ratio is turned on it’s head. There the cattle eat 90% grain and 10% grass instead of the natural 95% grass and 5% or so incidental seeds. Beef producers do this to produce beef with marbled fat quickly. In nature it takes time for young cow to build up fat reserves. This speeds things up considerably much to the detriment of you and me and the cow. In grandma’s day it took 4-5 years to do bring up a cow … now they do it in about a year.

Most Cattle Feed is Genetically Modified

If the squalor and illness combined with an inappropriate diet wasn’t bad enough you can add GMO grains to the mix. Most cattle are fed lots of corn which in the US is virtually all GMO at this point. Eating animals that have eaten GMO is roughly the same as eating it yourself. Why you wouldn’t want to eat GMO is too big a topic to cover here, so for now I’ll direct you to video of Dr. Mercola going over the recently released GMO study that found that lab rats developed huge tumors with females being most severely effected.

Then there’s the processing …

We’ve all heard the stories of pink slime, unclean practices, poor inspections, etc. in media. These huge processing plants handle unreal quantities of beef each day. They are concerned with preventing loss so they tend to salvage meats that should be destroyed. Pink slime is great example of that.

In Grandma’s day Upton Sinclair wrote a book called “The Jungle” that caused a public outcry over conditions in a Chicago slaughterhouse. This led to increased regulation of the business. Those regulations are largely still in place but are unevenly enforced.

But back then she had more options than buying from a butcher who got his meat from one of these big meat packing plants. For instance, in the little town I live in there was once not one but two different butchers. The local ranchers often brought animals to these butchers for processing. So the locals would have been able to buy locally raised meat just by stopping by their storefront. These shops are still in operation, but near as as I can tell they do not except animals for processing anymore. Well, one does but only deer in season. They both operate primarily as restaurants and sausage producers now. Point is, most towns had their own butcher, someone you knew and could be trusted to handle meat safely. No need to buy from the big producers at all.

Now things are different. Most small butcher shops have gone under. Most of us buy from stores that buy from the large processors. So what can we do now? When you buy meat locally you are generally getting meat that has been processed at a small butcher or processor. They are still around, usually in rural areas. Ranchers and farmers must travel pretty far to bring their animals to one. They check them out pretty carefully and know them personally. Find a farmer you trust and trust their choice of processor.

So what to do? If most beef is GMO grain-fed, packed shoulder-to-shoulder and up to their cow-knees in excrement, shot full of hormones and antibiotics and then finally processed for the store in potentially unsanitary conditions, how do we as consumers of beef avoid all this? The answer is simple, buy grassfed beef. With grassfed you completely avoid the feedlot and all it’s problems and you avoid the large beef processors too! You can find grassfed beef at health food stores, farmers markets and sometimes even at a conventional grocery store. You can also buy it online.

How to buy the best beef possible

So ideally, find a local farmer to buy your beef from. It’ll cost a little less than buying from a store, particularly if you have a freezer and buy in bulk.