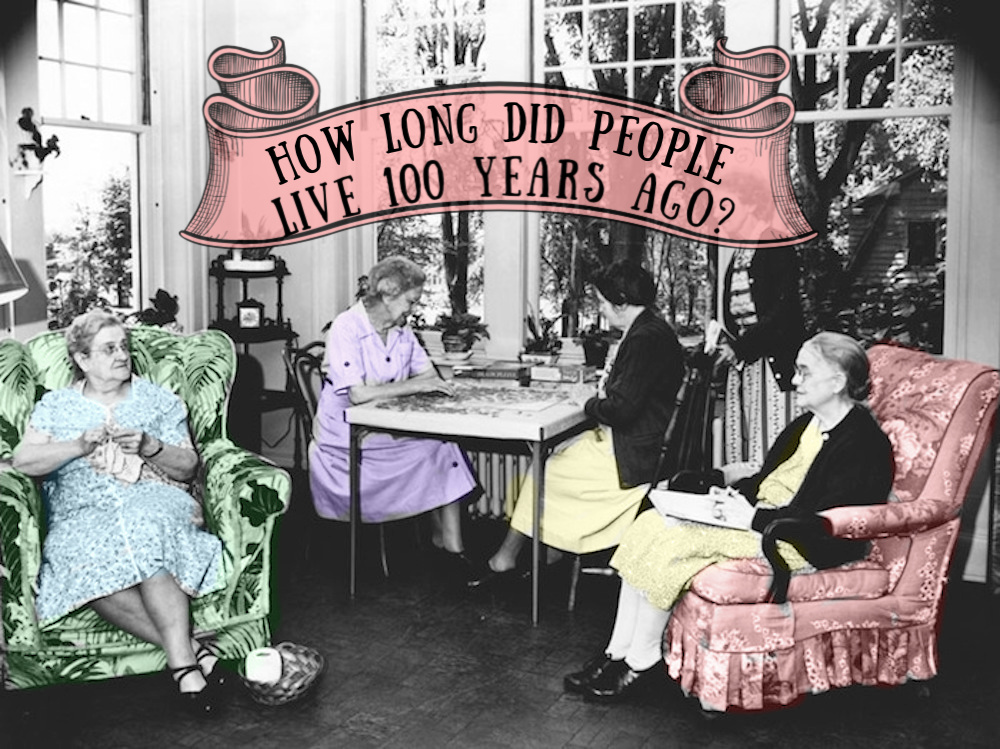 “Of course people didn’t live long … the average life expectancy was 40 years”. How often have you heard this quote or something very similar? If you are a watcher of tv documentaries or attended public school anytime in the last 70 years or so you’ve probably heard this several hundred times. Just last night I heard it again while watching Frontier House, the PBS reality show from about 10 years back.  The belief that most everyone in the past dropped dead around 40 is common. People with ancestors that lived to be old generally think the members of their family were just exceptionally long lived.

The story goes something like this: Prior to the introduction of antibiotics and vaccines most people succumbed to an infectious disease prior to or around middle age. Children died at a very high rate. Work was hard and cruel. Food was salty, fatty, monotonous, somewhat scarce and just plain bad for you. Life was short and miserable … Survival into old age was a rare miracle.

This is a myth. We’ve been mislead into believing this by a simple trick of statistics. In actuality life expectancy for a modern adult is pretty much the same now as it was back then. You’d expect it would be much better now with modern medicine but the statistics do not bear that out. What was it Mark Twain said?

“There are three kinds of lies: lies, damned lies, and statistics.”

Let’s review the evidence then we can know more clearly just how long average people with decent kind of life lived prior to the advent of modern diets and modern medicines.

The problem is simple really. When the media mention at what age people used to die they sometimes but not always mention that “life expectancy” statistics is the source of their information. Sounds reasonable enough … if life expectancy is 40 then people die on average at 40. Not true though.  We think “Life Expectancy” is a record of the actual age at death but it isn’t. It is calculated using a number of actuarial formulas … it is not a simple average of actual age at time of death. I had hoped to shed a little light on the calculation, but frankly only a mathematician could read the formulas :-). So there is some complexity there. Even if they were a simple average of actual age at time of death these averages would include all deaths from infants just born thru old age just as the “Life Expectancy” calculations do. The high number of deaths amongst infants and small children prior to modern sanitation and antibiotics will skew the numbers so the average is quite low. So if say 10% of babies and toddlers die before the age of 5 that will dramatically shift the average life expectancy downward.

Benjamin Radford at Live Science in this post about how lifespans have been constant for 2000 years explains the misunderstanding better than I can when he states:

Again, the high infant mortality rate skews the “life expectancy” dramatically downward. If a couple has two children and one of them dies in childbirth while the other lives to be 90, stating that on average the couple’s children lived to be 45 is statistically accurate but meaningless. Claiming a low average age of death due to high infant mortality is not the same as claiming that the average person in that population will die at that age.

I’ve put together the graph below to help illustrate. Now, I’m not a researcher nor a statistician but I spent a few hours searching for data that would help us clarify the problem. First I looked for historical stats on age at time of death. All I could find was “life expectancy” tables for various points in history so the numbers in the graph for 1900 are estimates based on statements from various books and articles. I was able to find good current year age at death records so that really helps. I also included a really unscientific survey of age at death taken from my local papers obituary. This includes age at death for 100 people in 2012/2013. If anyone knows where I can find good stats to replace my 1900 estimates please let me know.

Historically the number of deaths would be a kind of reverse bell curve with most deaths occurring in the very young and the very old. This chart illustrates the difference: 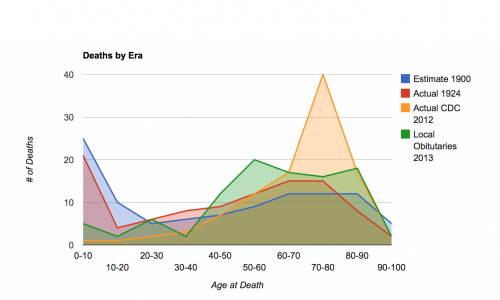 Now you may ask why the death statistics for infants and toddlers was so high … Good question! For starters, most statistics available for the era were taken in big cities at the turn of the century, places notoriously difficult to live in. The health statistics for adults were also not very good in these places, so children would have been very vulnerable. They were generally taken at large hospitals, places the healthy avoided. The rural areas where things were more traditional, the pace slower, the diet much better and the living more secure, well they didn’t keep records as closely and so tended to not be included in the numbers. There are a few interesting historical sources like this one published in the Journal Of The Royal Society Of Medicine on Victorian England showing that many average english of the victorian era lived long lives and enjoyed better health than modern people do. They were working with medical records taken from 1850-1900 that showed better health overall for this population than in the current British population. source article

Modern medicine has done a fabulous job of helping people in acute crisis. Like infants born too early, people with acute life-threatening infections, and those in terrible accidents. Access to modern medicine greatly reduces deaths from these causes. What it hasn’t done a good job of however is eliminating heart disease, cancer, diabetes and autoimmune illness, the biggest killers of the modern era.  In fact these diseases were extremely rare before modern times, so rare as to be statistically insignificant. Generally the deaths from these modern diseases balance with the deaths from accident and infectious diseases for the most part. The age at death is higher but still far short of a full lifespan.

What about the argument that people just didn’t live long enough back then to develop these degenerative conditions? Well, historically a large percentage of the population did in fact live to a ripe old age without developing any of these conditions. So this argument just doesn’t hold water.

Life Expectancy is lowest for those who are poorer

Always has been … obviously the main reason why people don’t want to be poor! There were populations of people in the past with extremely short lifespans. Generally these folks had little access to fresh clean food and water and were made to work very long hours in very unhealthy conditions. They had very limited diets and thus were susceptible to tuberculosis (TB), pneumonia, and diphtheria three of the major causes of death at the time. Those on extremely limited diets developed frank deficiency diseases like pellagra and beriberi in large numbers. They were very susceptible to injury on the job, and if injured received little or no assistance. This included about everyone that worked in large cities, had factory jobs, were miners or railroad workers. It would also include some rural people that had very exploitive working conditions, renting the land they worked from a landlord. People like sharecroppers for instance.  All these people were the poorest of the poor and like the poor in all times and places died an earlier death on average. My Mother used to say of women that died young “She lived a hard life” by way of explaining their early death.

In modern times we talk about these poverty conditions as if everyone in the past suffered this kind of restriction. Not the case at all!  The majority of people lived in settled rural communities with a tradition of local trade. While they may not have had a lot of cash or huge amounts of property they were still basically independent as a community. These small towns and villages were made up of yeoman farm families that produced food and traded largely amongst themselves.

The majority of the population of North America lived in such rural communities. This is what made the Americas attractive to immigrants. Farm living was widely regarded as the most wholesome kind of living and many made great efforts to attain land they could own outright rather than rent so they could enjoy the benefits of good food, sunshine and a guaranteed way to make a living.

Around the time of the construction of the railroads the independence of these communities began to be eaten away around the edges. These communities began to see a reduction in health as well. Many children from these farms had to go to cities to earn cash money to pay new or increased taxes for the family farm, or for the cash needs of the farm now that the community cohesion was deteriorating. People started to have to pay cash for many healthy food items rather than barter as in times past. Some foods were now brought in from a distance. Food adulteration became widespread, bringing the FDA into existence. This is the beginning of the loss of health Dr. Weston A Price saw in his practice around the turn of the century.

Upsurge in Degenerative Conditions Coincides with the Introduction of Processed Foods

Dr. Price was conducting his research at this time and was able to document the effects of these newfangled foods on populations that had previously ate only their own cultures diet. He was able to show that degenerative diseases became far more common once the processed foods were eaten particularly by the second generation.

Now we can enjoy the benefits of medical care for acute conditions AND the benefits of eating a healthy wholesome diet. We can live out our full lifespans in good health. We needn’t suffer from early death from infectious disease or degenerative modern conditions.  All we need to do is eat traditionally.

Update 4/5/13: I’ve added another series to the chart with actual numbers from 1924. Haven’t found the 1900 actuals but have made some adjustments to my estimate based on the 1924 numbers. I will include the actuals when I find them.
Sources:  1924 Actual Death Rate, Mortality Stats Table E