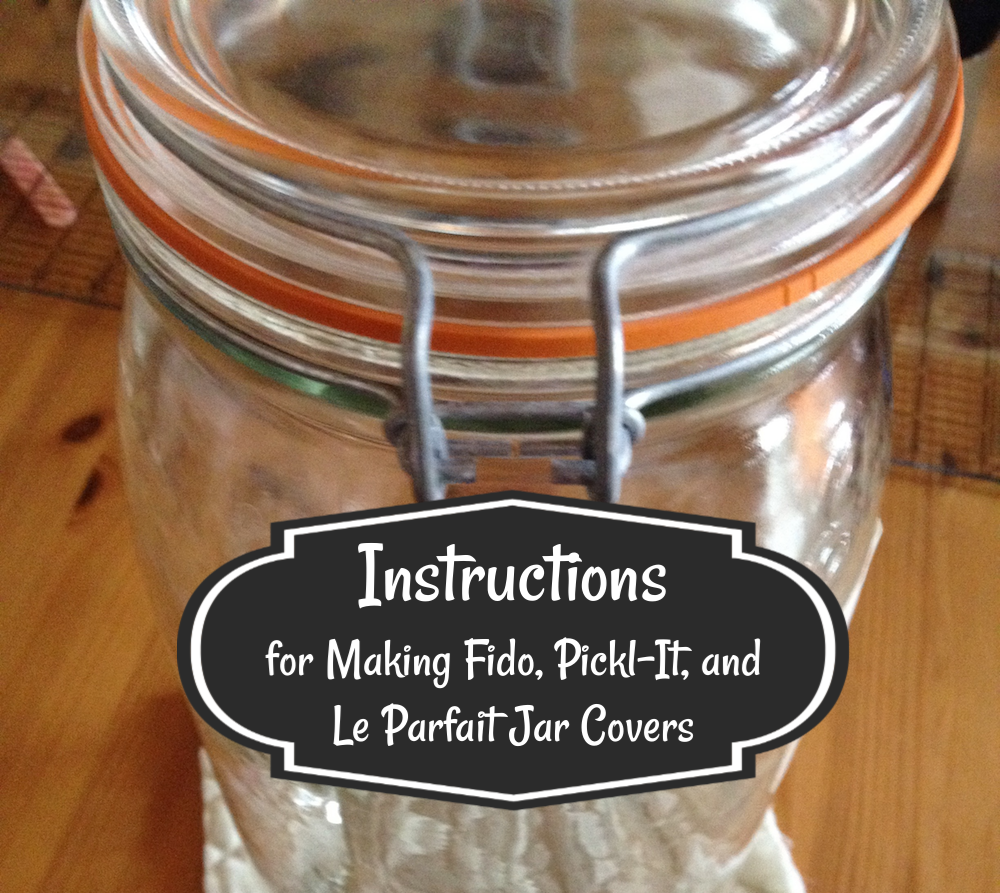 Want to cover up your ferments with something other than a towel and a clip? I’ve been doing more fermenting this summer and experimenting with my new little Pickl-It jars. With all these jars out in my little kitchen, well things look more cluttered. And I’ve been concerned that my rather thin little towels just weren’t cutting it in the keeping the jars dark department. So I decided to try to reproduce something similar to a jar cover I remember from the Pickl-It site last year.

I’m using three different kinds of jars; Pickl-It, Le Parfait and Fido. I’m using the same pattern to cover all three. The only difference is that the Pickl-It covers have a little hole in the top for the airlock. I’ve been collecting Le Parfait and Fido jars for about 20 years so I have quite a collection. Last winter I decided to order a couple of the tiniest Pickl-Its to see what they were all about too.

I’ll save the detail on my fermenting education for a future post. Suffice to say that I was really encouraged by the results Lea at Nourishing Treasure was getting fermenting in Fido jars and have since shifted most of my ferments to Fido and Le Parfait. Previously, I had used simple mason jars for the few dairy ferments I had going. I was pretty thrilled to discover that the jars I’ve been using mostly for dry storage do a great job of anaerobic fermenting too! So I have quite a few good fermenting vessels without any additional expense :-D.

With Jar Choice Out of the Way …

So with the issue of which jars to use out of the way at last, I set about making it practical to have several ferments going at once. I have some non-fermentation fans around, and while some ferments are simply gorgeous, others are, well less appetizing to look at. On the counter they are exposed to the light, unless you drape something over them. Putting them in a dark cabinet doesn’t work too well for me if I have several going. Just not enough cabinet space. I love to sew and thought, hmmmm this seems like as good an excuse to sew as any 😉 … I’ll make a cover for them.

I’ve shared a simple description and a pic with the Facebook Anaerobic Fermentation group. I’ll share this post with the Fido Fermenting group too. I’ve endeavored to make this pattern as simple to make as possible. I’m using double-sided quilted fabric to give the covers body. Jill posted a picture of several Pickl-It covers made in this design with a few towels, a really frugal and practical way to make them!

Instructions to Make Your Own Covers

That’s it!! Pretty simple, huh? Let me know in the comments below if I need to clarify anything. I’d love to see some pictures of your creations!