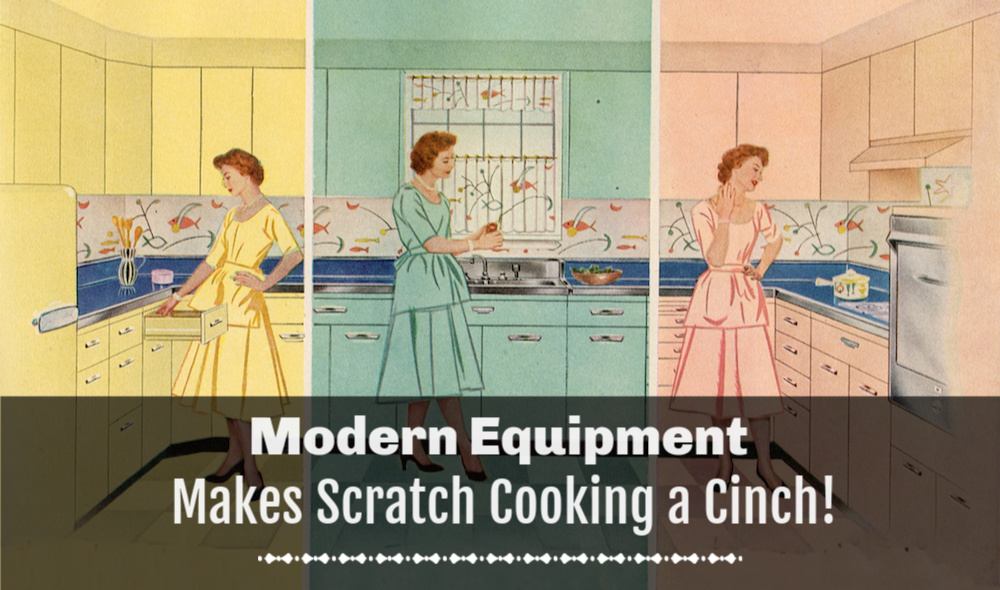 Is real food scratch cooking just too hard to do? Most people think so. And they’re aren’t talking about some of the more labor intensive or time consuming things you could do as a from-scratch cook either. Mostly people are talking about things a fifties housewife commonly did like bake a cake from a mix, frying chicken, or squeezing fresh orange juice. A depression-era housewife would have done all of these things and more like gardening and canning but without the modern appliances. She would be crazy jealous of all the appliances women commonly had in the fifties. And this fifties era housewife would marvel at all she could get done with the tools we can get at far less expense that a fifties household would have paid.

Granny Slaving Away in the Kitchen

We as modern folk see our grandmothers as slaves to the kitchen. And I imagine they were, at least by modern standards. They had to have 3 meals on the table each day. Usually they were feeding a rather large brood of kids and maybe an extended family member or two. That means lots of cooking with no days off! Without freezers cooking ahead was very limited. Prepping of food had to be handled right at the time of cooking for the most part, canned food being the exception. It was much harder to keep perishable food around the house with only tiny ice boxes to help keep things cool. That meant frequent shopping or ordering of food for those in town and lots of canning for their country sisters. This was a lot of work!

Our situation is totally different. We commonly have large refrigerators. Many of us have large freezers and those that don’t could find a used one pretty cheaply. Small appliances like mixers, food processors and blenders can be had pretty cheaply. Consider that a typical mixer cost $30 in the fifties. That amounts to roughly half a weeks pay. Now a stand mixer can be had for as little as $30, 3% of a weeks income, or as much as $400-$500 for one of the very best mixers on the market. That’ll cost roughly what an average mixer cost in the 50’s. A freezer would have set you back more than a months pay in the 50’s. Now even if you buy it new it’ll only run about $500 for a medium sized chest freezer, or a half week’s pay. If you get it used it’ll be around half that. Yet, even with the high prices in the fifties these new appliances were very popular and sold well. People wanted to invest in better food and an easier time making it.

Another way our situation is generally different is that it is unlikely we’re feeding an army of people :-). Household size has gone down with large families becoming more unusual since then. Probably you only have a few folks at your table. And with many of them gone during the day only needing a packed cold lunch rather than a full hot meal midday.

People often cite the fact the grandma was generally home all day giving her lots of time to cook. Back then she really needed it! Now, with our changed circumstances, not so much.

Real Food Without the Kitchen Drudgery

The image of an exhausted woman sweating and slaving over a hot stove is history, at least in the industrialized world. The message of all those vintage 50’s ads showing a happy woman breezing around her beautiful efficient kitchen has been realized. If only we knew it! Looking at the world thru Granny’s eyes helps us see what a miracle that is and how much she would have appreciated it.

But right along with those ads our mother’s generation was given the message over and over again, “Cooking is Drudgery”. Sure, buy the time-saving appliances but don’t stop there! Buy our processed foods too and that will cut your cooking time to an absolute bare minimum, down to just reheating or stirring whenever possible. And women bought the processed food products in droves! By the 70’s and 80’s those modern appliances remained untouched in many kitchens for years! All except the microwave oven of course ;-). But, let’s turn the tables, shall we? Let’s keep the modern kitchen appliances and do without the modern processed food. We will still experience much of the time-savings that came to homemakers in the 50’s and 60’s while skipping the negative effects of the icky food products introduced at that time.

We can have the real food meals Granny made, but without being tethered to the kitchen in the same way she was by having good tools.

Having the Right Tool for the Job

So do you have to have modern tools to make real food? Absolutely not! Women have been preparing real food without it forever obviously. But a few basics can really help make the difference between success and discouragement in the transition to real food. First among these is, I think, a freezer of some reasonable size. Having even a small chest freezer makes it possible to make food in batches. It makes it possible to buy food ahead at the best possible prices. It keeps you from doing so much hunting for decent food giving you time to cook it instead. Next, after that a good mixer, food processor and/or blender. And if you want to bake, an electric grinder. Don’t let the lack of tools stop you from getting started, but don’t wait longer than you have to to acquire these basic appliances. If cost is an issue, buy them used. My freezer is a craigslist find, though my mixer/food processor/blender was not.

A couple of good cookware can make life easier too.

Enjoy the Benefits of the Kitchen Revolution!

We’ve taken these little miracles so for granted since they were first introduced to us way back when. We were encouraged to do so by Madison Avenue, with thousands of images and taglines all pointing in the same direction. They said “Get out of the kitchen as fast as you can using our product!” While much of that time-savings came at the high price of our health, for the most part modern tools were not involved in that loss of nutrition. Microwaves are a major exception to that, but that’s a subject for another post. For now avoid microwave ovens whenever you can.

Other than that, enjoy the kitchen revolution our mothers and grandmothers were so ecstatic over! Use those modern kitchen appliances and come to appreciate what a miracle they are in the grand sweep of human history!