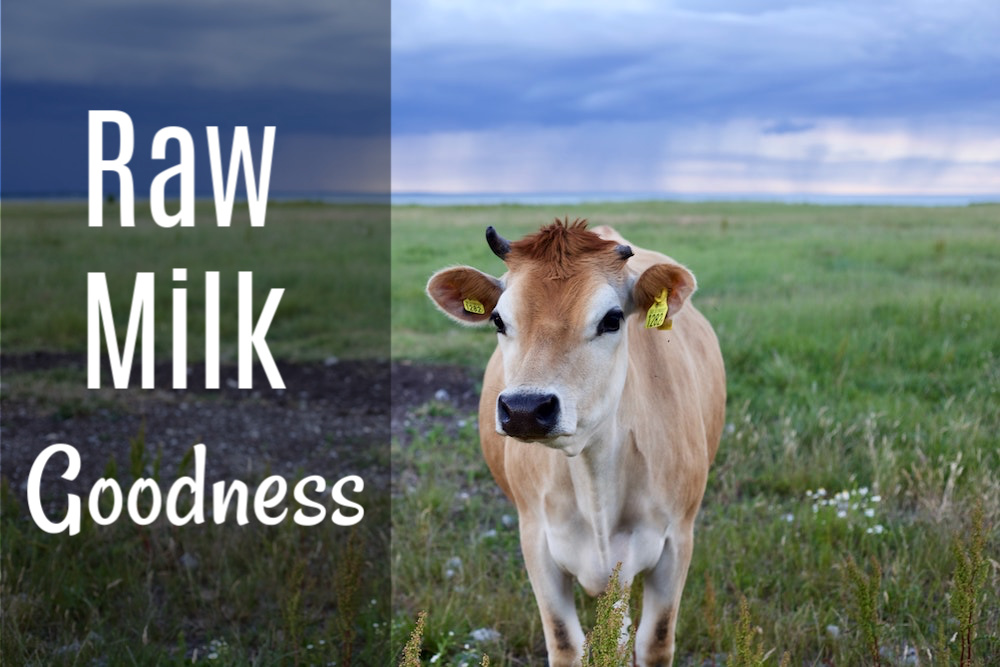 Grandma most likely got her milk from the local dairyman, or milk man. A couple of days a week she would leave a note on the porch with any special instructions about extra cream, or more eggs. And magically milk, cream and eggs would appear on the porch. This milk most likely came from a small local dairy with about 20 or so cows at most. These cows grazed in between milking time. The milk wasn’t pasteurized … it wasn’t homogenized, it was just pure raw whole milk.

Milk was a critical household staple and regarded highly as one of natures most perfect foods. It was widely believed that everyone needed milk each day and if you didn’t get it after awhile your health would suffer. There was widespread concern that all children especially have access to plenty of milk. While some still believe this today there are many who don’t. In Grandma’s day this belief was pretty much universal.

Milk is still one of natures most perfect foods though if you had to judge by the dairy products available at the grocery store you’d never know it. Produced by cows given hormones and antibiotics, skimmed of cream, heated to high temperatures and homogenized to ensure the remaining cream mixes well, then enriched with synthetic vitamins it bares little resemblance to the pure product of the farm. Many have developed allergies to this kind of milk. Many cannot eat it at all.

Most people today think that pure raw milk is unavailable in the United States. Many believe it is illegal to sell raw milk. That is not the case though in most of the US. It is, however, not as simple as going to the grocery store in most places and magical milkmen have become an endangered species. Raw milk sales are restricted in ways that make getting it a bit more difficult to get, but doable. But first before we talk about how to get this milk for yourselves, let’s talk some more about the qualities we are seeking in a good source of milk.

What is real milk?

The important points to keep in mind while checking out a potential source are (courtesy of RealMilk.com):

So, it’s a pretty short list of things we’re looking for in a dairy farm.

How do we find a source?

First you’ll need to consider the laws of your state regarding raw milk. Here’s a link to a map showing the current legal status of raw milk by state. This will give you an idea of where you’ll need to go. In some states raw milk is available at retail outlets, so that’s pretty easy. The local health food stores will be able to help there. In others like Texas, it is strictly sold on the farm so you’ll need to know a dairy farmer. Don’t worry, it’s not as hard as it sounds 🙂 I don’t know much about the other legal status states though. You’ll need to find the closest local chapter of the Weston Price Foundation and they should be able to help.

If you are looking to buy direct from the farmer there’s a few things you can try. I found my farmer by Googling for dairy farms in my part of Texas. I did cast a wide net and found a farm about an hour and a half from my home. You can also ask around amongst like minded friends, or contact someone from WAPF for help.

You could also consider raising a cow or a few goats yourself, if you have a little more available time. I’m a bona fide city girl from Houston and I managed to raise and milk several Nubian goats for a few years. It was a lot of fun and I still miss my goaty girls. I hope to raise a few more one day.

Milk is gonna be more expensive this way, let me tell you right now. But oh, so worth it! Raw milk is stupendously delicious as well as nutritious. It’s like drinking liquid ice cream! You won’t have any trouble getting the kids to drink their milk.</p

Keep in mind too that Grandma paid a larger portion of her income on food, about 22% to be precise. The average spent on food in the US is about 10% of income currently. The low price of grocery store milk is made possible by the very practices we are seeking to avoid for our own milk. Quality is worth the price. The money goes to a good cause, supporting our local dairy farmers and you can feel proud of that.