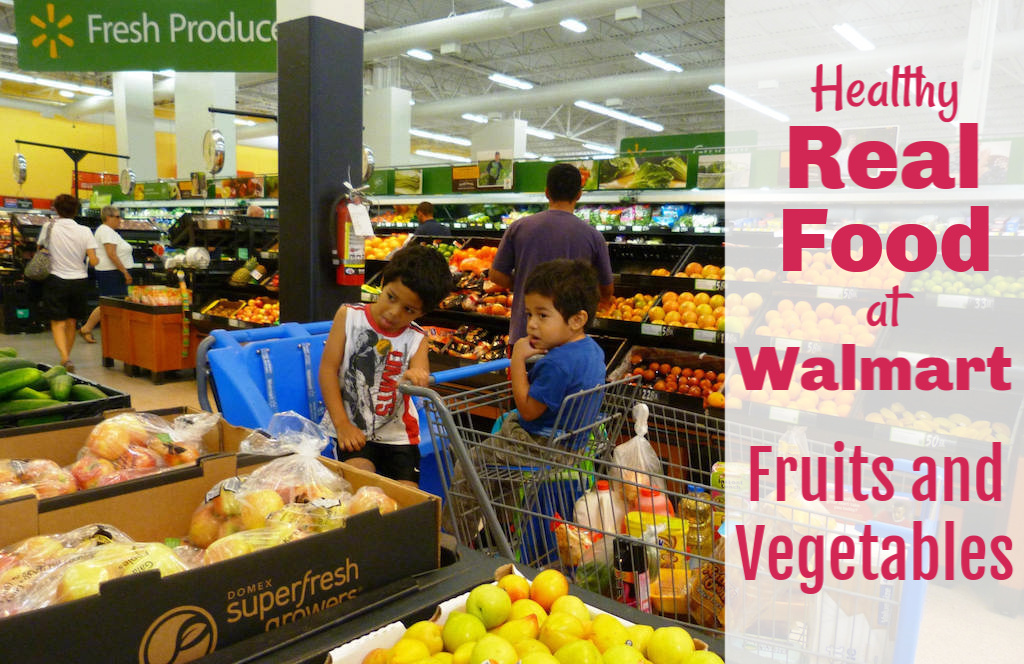 What is the first thing people think of when they decide to start eating healthy? Getting more fruits and vegetables into their daily diet of course! I thought we’d start here for that reason … Also, fruits and veggies at Walmart are pretty easy as long as we are okay with compromise on the issue of organics. We should save some of the harder choices with very limited options for later  … I don’t want to discourage anyone.

What about the issue of organics? Is it wise to compromise on this? Well, considering our premise which is “What if you HAD to buy all your food at Walmart?” based on what I’ve seen you would have no other choice when it comes to produce. Is this compromise unacceptable using our two guideline questions “Would Grandma recognize this as real food? and “Would Sally Fallon consider this compromise unacceptable?”. Grandma would definitely recognize produce as real food conventional or not. Sally Fallon’s take on the issue is to encourage shoppers to buy the best food available to them that they can afford. However, I think if she addressed this issue directly in a new edition she would put GMO conventional crops on her list to “newfangled foods” to completely avoid … what could be more newfangled than GMO?

How Important is Organic Produce?

No one wants to eat food that’s been sprayed with pesticides and herbicides. Organic food offers the promise of chemical free food. It seems pretty black and white, sprayed or not sprayed. Well, the truth is a little more nuanced than that. Many large industrial-scale organic farms spray quite a bit of the pesticides allowed under the USDA organic labeling regulations. While these pesticides are far less toxic than conventional pesticides and that’s good, for that very reason large-scale farmers tend to use lots of them. The organic food suppliers working with Walmart are virtually guaranteed to be these industrial scale farms, just by the scale of demand Walmart food buyers would require. This scale requirement is part of the reason why organic produce is extremely limited at Walmart I’m sure. I went to two different stores and found only carrots, celery, broccoli and green onions fresh and organically grown. I found zero organic frozen produce.

“Very few fresh fruits and vegetables for sale in the U.S. are genetically modified. Novel products such as seedless watermelons are NOT genetically modified. Small amounts of zucchini, yellow crookneck squash, and sweet corn may be GM. The only commercialized GM fruit is papaya from Hawaii—about half of Hawaii’s papayas are GM.”

In the news you’ll hear about all the new strains of GMO foods being produced. These varieties are at various stages of development, approval and introduction to the food supply which the media might not make clear. Currently there are a handful of GMO crops in the food supply, several of which dominate their crop. We’ll talk more specifically about them in later posts … for now it’s enough to know that you are unlikely to encounter GMO in the grocery store produce section. To be completely sure you can avoid all the produce Dr. Mercola mentions in the quote above. No zucchini, yellow squash, papaya or sweet corn. I only buy these from trusted sources myself. 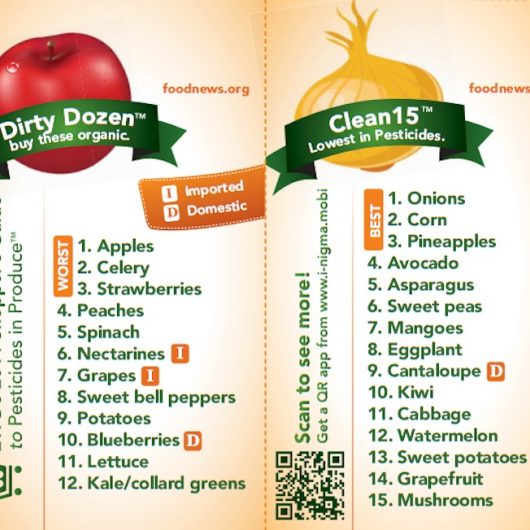 Don’t Prioritize Fruits and Veggies in your Budget

Fruits and veggies aren’t the most important things in a healthy diet … sacrilege I know. Access to healthy fats is first priority, not veggies! But most people when new to “Real Food” focus in on finding and affording organic produce. This can be very discouraging since organic produce can be sizably more expensive and hard to find to boot. Simply buy whatever produce you enjoy eating and don’t sweat the rest! It isn’t necessary to eat lots of fruits and vegetables to have a healthy diet. Many healthy primitive groups in Dr. Price’s work ate little in the way of vegetables and fruits and Sally has joked that vegetables are great as a vehicle for lots of butter  . In all probably you’ll still be eating far more fruits and veggies than most folks without effort just for variety in your meals.

For those with tight budgets I’d recommend buying frozen veggies for cooking and fresh vegetables for fermenting. In general you’ll find the frozen version less expensive and about the same in nutritive value. Most grocery store produce has had a long journey to reach you and fresh produce rapidly loses nutrition after harvesting leaving grocery fresh produce with about the same vitamin levels as frozen. Some things taste more bitter after freezing I find, like broccoli for instance, so use your judgement here.

For obvious reasons Walmart doesn’t offer online ordering of produce. They do however have a number of their frozen and fresh produce items available for viewing on their website. How could this help? If you see something online you like that isn’t at your store it’s possible the manager could request that it be added to their regular inventory. They can also tell you online whether it is or isn’t a regular item at your store. Can’t hurt to ask for it to be included!

What’s your experience at your store? Do you find more or less variety? How about organics? Tell us about your store in the comments below.

Introduction: Can it be Done?
Part 1: A Quick Tour of Walmart
Part 2: Fruits and Vegetables
Part 3: Fats and Oils
Part 4: Meat and Bones
Part 5: The Dairy Section
Part 6: Pantry Foods
Conclusion: The Nature of Compromise