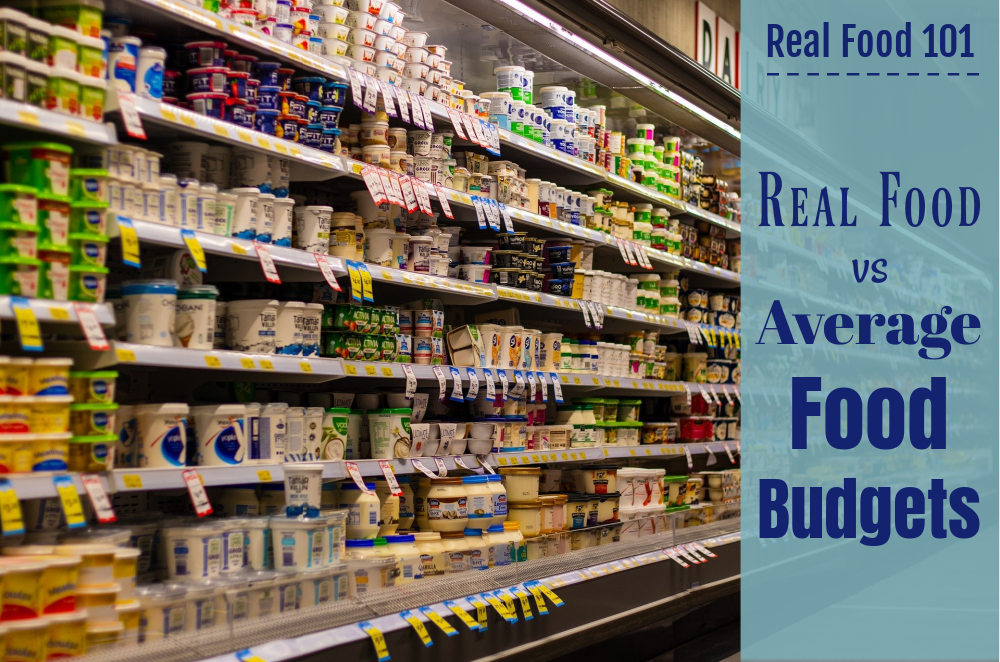 This post is part of a series, Real Food Economics 101. The series covers the cost of real food and applying the 80/20 rule to managing your time and money in the kitchen in depth. Click here to start at the beginning.

Last week in “Is Real Food Really More Expensive?” I suggested that real food is really very affordable … today I thought we’d take a look at proving it :-).

The general perception is the real food is really, really expensive! Far out of range for the average person to have more than occasionally. They don’t call Whole Foods Whole Paycheck for nothing ;-). Well, maybe Whole Foods as a grocery store is really expensive, but does it follow that real food eating is much more expensive? To answer that question we need to know just how much do people spend on food on average on both an average diet and a real food diet.

According to the USDA the average family of four is spending somewhere between $544 to $1235 per month for food eaten at home. That’s a huge range! They break it down into 4 plans: Thrifty, low-cost, moderate, and liberal. I did a little searching around the web to see what people might be saying about their budgets in relation to these 4 plans. I found a few thrifty’s, a lot of low-cost or moderates, and no one who admits to spending the liberal plan :-). So for the sake of argument I’ll assume that the moderate plan is pretty average. The moderate plan for a family of four with small children is $855 per month. That is $7 a day for each person. Sounds pretty reasonable …

This USDA plan assumes this family of 4 always eats at home, never at McDonald’s, Subway, or Applebee’s. A single meal out can blow the entire days food budget! Knowing that Americans eat out 5 times a week I consider this a low number. Now note that it is very possible to eat for less than this if you are cooking mostly from scratch from the usual grocery store fats and meats, grains and flours, canned vegetables and some fresh produce. A quick search around the web will find many people telling how to feed a family of four for $75-$100 a week. That this seems surprising tells me that most are most likely spending quite a bit more.

OK, so we’ve nailed down a decent estimate of the average food budget. Now let’s take a look at a some real life real food budgets. Several real food bloggers have been generous enough to share their food budgets on their blogs. This has been a great help to working out an average real food budget for the sake of our little research project :-).

I ran a quick calculation of the average per person per day. In this admittedly limited research project real food budgets come out clearly less expensive at:

So, just $5 per day each. That’s $2 less per person per day than the average USDA food budget. For a family of 4 that is $600 per month, with some families coming in a lot lower. The average USDA monthly food budget for that same family is $840.

My family ranks toward the high end of the range mainly because we like to eat a larger amount of meat, raw milk and fresh cheese. But note that we are still below the USDA average cost. Several of the bloggers above mentioned reducing animal products and increasing veggies in their diet as a means of reducing expenses. Almost all the bloggers are buying most of their food in bulk and directly from the producers. They avoid packaged foods. They also mention eating seasonally as a way they keep costs down. We do these things too :-).

How is this achieved?

In last week’s post I talked some about the trade off’s of time vs. money vs. quality. These blogger’s have relatively low food bills largely because of a willingness to trade their time to reduce costs and improve quality. So they look for local suppliers, participate in bulk group buys, and make most of their food at home from scratch. They seldom eat out. Most describe how it took awhile for them to reach this point on their blogs. Gradually, over time they built up the routines and knowledge, gradually they replaced foods from the supermarket with better versions, gradually their families became accustomed to the change.

Next week I hope to go into greater detail on how this savings on real food is achieved and how you can given a little time change your routines to achieve them too!

** This is for the past year in which we were 4 living at home.