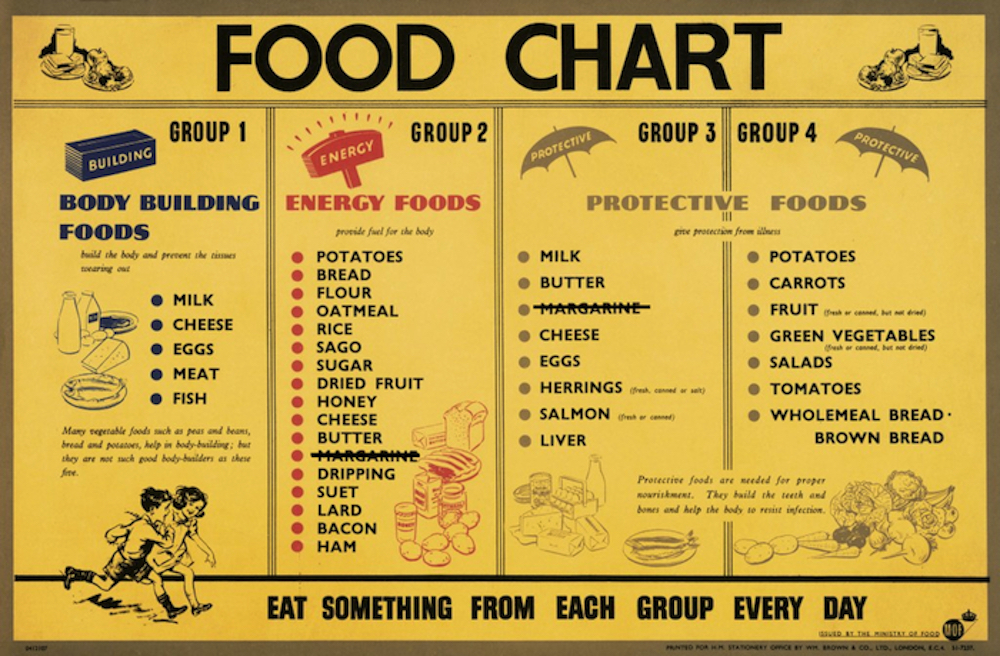 Interesting chart, huh? Foods are viewed as “body building” or for “energy” or as “protective”. This suggests people should eat plenty of milk, cheese, eggs, fish, and meat along with lots of lard, suet, tallow, butter, bacon and ham and plenty of starchy foods too. Wonder where this chart came from? It was issued by the British Ministry of Food during the Second World War. The chart shown in last weeks post on the first 5 principles of what makes a diet good is a very similar chart produced by the USDA during the wartime years.

While they are not perfect they represent a dietary ideal that is far closer to traditional eating than the current dietary recommendations coming out of both governments. The USDA’s current version, “My Plate” is a joke of an overly simplified view of a good diet. There is so much room for misunderstanding you could drive a truck through it. To take just one example, there is no mention of good fat vs. bad fats, or any mention of fats at all! It’d be funny if it weren’t so sad. In contrast the chart above is very clear about the necessity of eating plenty of good fat each day and recommends several traditional fats as options. You can see the very beginnings of food industry influence in the recommendation that margarine is a good substitute for butter. Not better than, mind you, but an acceptable substitute during the war years when butter was scarce in both Britain and the US. I don’t think most of the population of either country believed this hogwash at the time, but they made do because they had to.

So the government started issuing these recommendations around the time of the Second World War and they’ve been updating them ever since. I don’t know if any other governments have gotten into the act, but I wouldn’t be surprised to find they have and are making very similar recommendations to their populace. Millions of people make every day dietary decisions based on these guidelines. The media shouts them from the rooftop to make sure everyone knows them and believes they are just common sense.

This is one guideline that the USDA makes quite clear to people and the message received is mostly correct, with a few exceptions. A good diet includes some fresh fruits and vegetables either raw or lightly cooked with the exception of a few vegetables that need to be well cooked to reduce the anti-nutrients occurring naturally in them. Where the USDA goes wrong is in suggesting such large portions that they would displace more nutrient dense food. So eat your fruits and veggies, and don’t feel guilty if you you’re not drowning in them :-).

Use whole grains and nuts that have been prepared by soaking, sprouting or sour leavening to neutralize phytic acid and other anti-nutrients.

Most people have gotten the message that whole grains are the way to go. But what they haven’t heard is that these whole grains must be properly prepared or they cause more harm than good. Many suggest you’d be better off eating white flours than improperly prepared whole wheat flours. Not sure I’d go quite that far, but I see the point.

So what is proper preparation? Grains have to be either sprouted prior to grinding, or soaked in an acid liquid for a time, or fermented in a sourdough type of bread. All traditional cultures did this. Modern grain preparation or lack thereof is an aberration.

Prior to refrigeration and the advent of modern canning foods were commonly fermented to help them to last longer. Now this wasn’t the “last till the end of the nuclear fallout” kind of preservation. It was more like “now we’ll have peppers till the next crop comes in” kind thing. Our digestive systems were designed to work with the microbes we ingest from these ferments and we need them in our diets. The bacteria make the nutrients in the food more bioavailable and actually increase the amount of nutrition in the food. Never in history has there been a long lasting civilization that didn’t practice some form of fermented food preservation.

Prepare homemade meat stocks from the bones of chicken, beef, lamb or fish and use liberally in soups and sauces.

Granny always had something cooking on the back of the stove. She’d throw in leftover vegetables, bits of meat and bones and let it simmer for days, or more likely pretty continuously. She’d just ladle out a cup or two for some hungry kin and then let the pot keep simmering. Add a little water and some more leftover bits and keep going. Most every meal included soups made with this broth, or gravies and sauces. We need to eat homemade gelatinous broth every day.

Use herb teas and coffee substitutes in moderation.

This guideline is less about suggesting a food than it is about limiting your tea and coffee intake. These foods would have been expensive if available at all to your ancestors and as such they wouldn’t be everyday fare. That is unless your ancestors were well off or grew coffee or tea ;-).

Some herbal teas would be more readily available I’m sure. But keep in mind many herbs have medicinal effects when taken in quantity so you’ll want to research any you enjoy regularly.