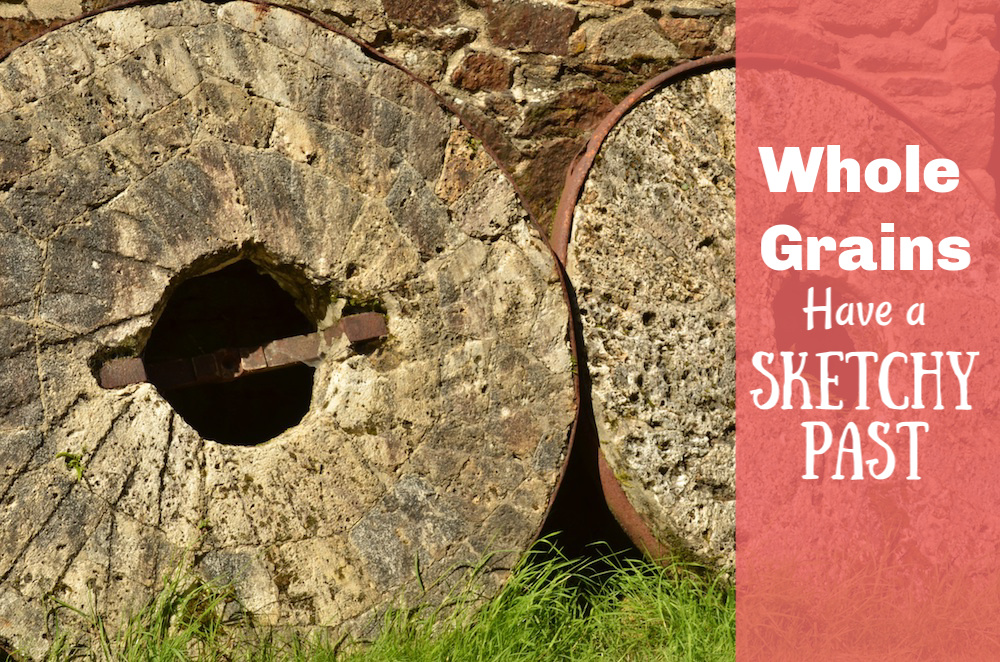 To most everyone in the western world whole grains are always better for you than refined grains. To all it’s really clear, black-and-white. The only real argument that exists concerning grains is over whether or not we should be eating them at all. Some say they are allergenic to pretty much everyone. Some say they are unnatural, not in alignment with what man has evolved to eat. Some say that grains have changed too much through hybridization and now we should avoid them completely. You’ll find many voices making these arguments all over the web. Most everyone assumes that if you’re eating grains and you’re concerned about health you will be eating whole grains exclusively.

Have you considered that historically people ate grains that weren’t really whole grains? Nor were they completely refined in the modern sense? That perhaps the traditional processing of grains was done with the goal of a highly refined product but that goal could not be reached given the technology? So throughout history people ate grains that were somewhere in-between modern bleached enriched flours and rough coarse 100% whole grain flour? My research leads me to believe that this is the case.0

Great-Great-Great Grandma ate a kind of mid-level sifted grain … not really whole grain but not thoroughly milled and sifted like white flour either.

If that’s the case, how did this idea that people ate whole grains from the advent of agriculture all the way up to the industrial revolution come about?

Let me introduce you to the two main characters in this little drama. Both of them have household names, though you might not have ever heard much about them as individuals. I mentioned them briefly in my post on flour some time back.

The first actor to enter the stage is the Reverend Sylvester Graham, the inventor of the graham cracker. He was about the first popular health food reformer in American history. He promoted a vegetarian diet as a cure for alcoholism and sexual urges. He had many followers who treated his dietary teachings as a form of religion. They became known as Grahamites. He was an early campaigner against additives in flours … a good thing, so his efforts weren’t totally off. Still, his outlook was fueled by a strong desire to eliminate desire … ironic, huh ;-).

Next we have a man powerfully influenced by Graham’s beliefs Dr. John Harvey Kellogg, the very same brother of the founder of the cereal brand, Kellogg’s. Dr. Kellogg was also a supporter of vegetarianism like Graham. He promoted and experimented with a very wide range of treatments. Things like electro-hydric bathes … water and electricity! He applied electricity to the body as a treatment, as was popular at the time. He also recommended ingesting paraffin wax as a laxative.

Both of these men were famous and influential. They were not unknown cranks with an axe to grind. They spent their lives hard at work to change peoples diets. In both cases the central message concerning grain was that people needed to turn from eating sifted flours and instead eat flours which included the whole grain.

Pause and think about that for a second … if people were eating whole grains, had always eaten whole grains would this message have been necessary at all? The mere fact of all the preaching on the benefits of whole grains tells us that eating whole grains was not widespread up till this time. Clearly then people did not normally eat whole grain products if getting them to consider it required such vigorous efforts.

In fact people typically ate sifted flours. This flour was then sold according to the fiber content, the most heavily sifted and free of bran being the most expensive. It’s important to note that this sifted flour wouldn’t be like modern bleached white flour. The technology involved wouldn’t allow the miller to reach such a level of purity. All the flours contained some bran and germ unlike modern white flour. But you couldn’t exactly call it 100% whole wheat either. It’s also important to note that this sifting went on all the way back to antiquity. A little more on that in my post on flour.

A vegetarianism that includes a lot of whole grain foods was promoted by both of these men. In Graham’s case it was for largely religious reasons. His audience was well aware that whole grain flour wasn’t traditional. Kellogg believed that all disease begins in the bowels so his diet and methods were designed to cleanse the gut of putrification. He made very extensive use of enemas. The added fiber was seen as an aid to this vigorous intestinal cleansing.

Both men argued powerfully not for a return to a traditional diet but for a massive change from it. Their ideas were widely circulated and influenced a generation of doctors, particularly Kellogg as the head of a famous hospital. Thru them the thought of whole grains as an ideal gained a foothold and continued to more deeply establish itself. A few generations came and went and now pretty much everyone believes that whole grains are the traditional way to eat grains.

So there you have it

The whole sketchy history of how we got started down the road of believing whole grains to be traditional. I’d like to leave you with a few links to some excellent articles questioning the wisdom of eating modern 100% whole grains. Mind you, not the wisdom of eating grains period but just 100% all of the grain whole grain products. I myself eat a moderate amount of grains, mostly rice. When eating grains with any fiber content at all I soak it first. The flour I grind and sift at home still contains bran and germ, just less of it than commercial 100% whole wheat. I’ve found it to be the closest to traditional flours from an old-fashioned mill that I can get. I talk some about how I make it in this post on flour.