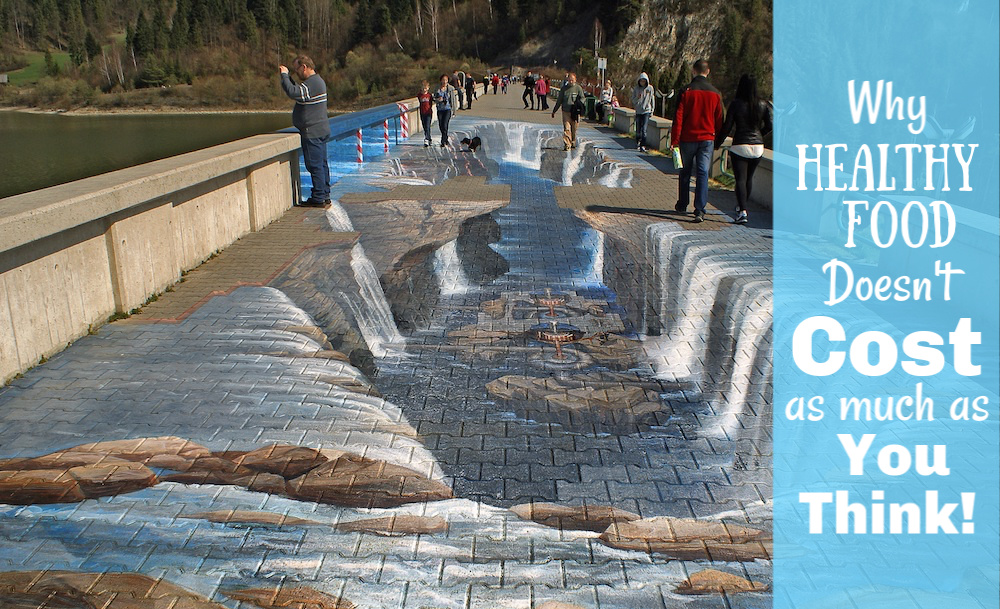 Perception is a funny thing, isn’t it?

Take this picture for example. It looks for all the world like water is spilling into thru the wall and into a hole doesn’t it? Yet it is just the angle of the camera. If the photographer walked around to the other side of the drawing and took a picture we’d see something that would look pretty much like what it actually is: colored chalk carefully drawn onto a street. We probably would have trouble making out what it was intended to be a drawing of!

Our perception of everyday things can be just a skewed. Sometimes things can seem like simple common sense but still be wrong, dead wrong. Take the common belief that eating healthy is very expensive. That it is something beyond the reach of the average joe. Take this quote from USA Today for example:

“Almost 15 percent of households in America say they don’t have enough money to eat the way they want to eat,” Seligman said. Recent estimates show 49 million Americans make food decisions based on cost, she added.

Does this mean they are dead wrong and if they’d get their act together they could actually be eating sushi everyday, or the kind of salads sold at upscale restaurants, or even steak and lobster? Absolutely not! Few can afford to eat in this fashion regularly. What it does mean is that there are many different ways to create a healthy real food diet. This isn’t an either steak and lobster or Kraft mac-n-cheese kinda choice. That is a false dichotomy. We don’t have to afford baby lettuce produced by virgins in the finest soils … produce common and organic is fine! Plain ground grassfed beef is fine … no need for steak if the budget does not allow for it.

A Little More for Some Things, A Lot Less for Many Others

Experienced real foodies know that while you pay much more for some items you end up paying way less for others. Say you spend twice as much per pound for meat. That isn’t at all uncommon. But at the same time you give up buying deli chicken from the grocery store, or boxed cereals, or frozen dinners. Or say you were in the habit of ordering pizza every Friday for movie night. Now you make a fun buffet mexican meal instead. The takeout pizzas cost about $16 each and the grassfed beef taco dinner costs around $10 for a family of four. That’s a savings of $6 right there, but hardly anyone just orders a pizza. Instead they order dippin’ breads with sauce, and big bottles of soda bringing the bill to about $30 with tax. Then you need to tip the driver. You could save $20 just by buying that grassfed beef and making a nutritious and fun dinner at home!

Lots of things are like this. When I shop at a grocery store I route around all the Betty Crocker boxes, and packaged wing-dings, and frozen ready-to-heat pot roasts all of which costs substantially more than their nutritional value would support. Buying them will take a bite out of your food budget. Buying plain potatoes, or bags of plain rice and spices in quantities larger than the tiny rip-off jars they usually have on the spice aisle instead of these convenience foods makes all the difference. These plain foods are dirt cheap let me tell ya, even in their organic versions. Pound per pound, calorie per calorie, nutrient by nutrient they are cheaper dollarwise than the cheap processed foods so commonly eaten by those trying to eat within a budget.

In my post Real Food Economics 101: Real Food vs Average Food Budgets I give details about what several real food bloggers are spending for food, person by person. This makes it easy to compare. My findings were that virtually all of the real food bloggers were spending less per day per person than the USDA’s moderate food plan costs. I give more detail on how that is achieved in Real Food Economics 101: Strategies to Reduce Food Costs. I hear from people every week who have even lower food costs than the ones cited in my post. This is real people … this is doable!

Dealing With the Perception of Added Expense

While the belief that eating the real foods way costs double or triple what a conventional food budget does is totally false the fact the many perceive it that way is not. The perception of expense alone can cause grave difficulties in transitioning a family to real food. And these problems are interpersonal in nature. Like say your mother-in-law not only thinks you’re endangering the kids with raw milk but you’re wasting tons of money to do so and whispers to your husband about it whenever she has a chance. It’s eating away at his resolve to feed the kids real food since his job isn’t really secure and he’s worried about saving more money as a cushion. Or maybe your spouse never goes to the store and has little idea of food prices but believes everything is cheaper at Walmart. They reason that since you’re on a budget that is really the only place your family should buy food. These problems of perception are very real obstacles to transitioning to real food. In fact I’d venture to say they are about the biggest problems in transitioning to real food with a desire for the comfort of familiar foods coming in a close second.

These perceptions won’t disappear overnight that’s for sure. In many cases they may never go away. You may never persuade your mother-in-law that your food bill is less now than it was before. But you can be aware of the issue and provide your husband with the supporting information he needs to be assured that this new way of eating is not only healthy but is in fact saving the family money. Dealing with these problems is mostly a matter of being aware, remaining calm and presenting the facts to those involved in the decision making. Absolutely do not pay much attention to what those that are not directly involved think of your food decisions. And lastly, it’s a matter of persistence. These things can take some real time.

While most shoppers are buying convenience foods and eating fast food there are a sizable minority of families that have cut out all processed foods and eating meals out and are still having issues making ends meet when it comes to food. I do hear from them and I get it. Just wanted to give them a shout-out in this post that the problems addressed here are not the issues they are directly dealing with. I hope to write something soon that will more directly deal with their situation.